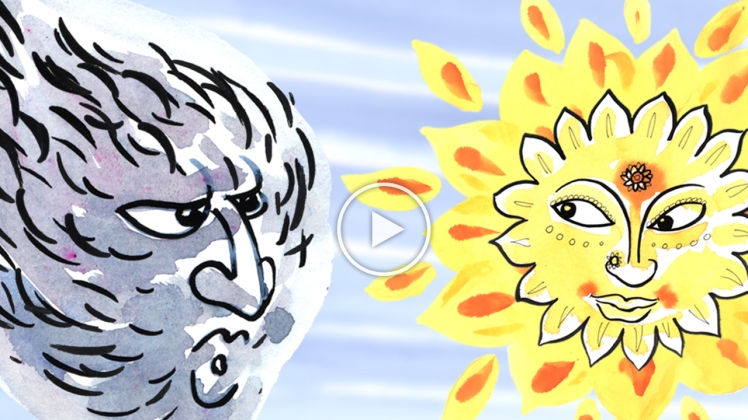 Classroom debates might be a lot of fun – provided that the subject is fun itself! It might not be so fun solving the problem of global warming or discussing ethics of euthanasia – you do not want to bore your students to tears, do you?

Having agreed on that, I reckon, you and your students are going to enjoy an infinite range of topics depending on their age and interests. The more unconventional, hilarious and creative the subject is, the more engaged your students will get. And this, of course, means much more efficient learning. As a fun prelude to your classroom debate, I would like to suggest The Wind and The Sun tale.

The two protagonists, the Wind and the Sun argue who is stronger, which leads to a creative challenge proposed by the clever Sun. As a result, the Wind takes a disgraceful beating having been outwitted by the Sun’s brains, despite being physically stronger indeed. Since the tale is roughly 6 minutes long, I would recommend it as a warm-up activity. The video on YouTube has default same-subtitling feature; however, you can get a non-subtitled version at BookBox website.

Having watched the video, I asked the students why they think the Sun won the wrestle, concluding that a successful discussion/negotiation is not about the facts, but the way we present the arguments. To support my words, I told them they were going to see for themselves how witty they could be if they wanted to prove their point.

I divided my students into two groups and asked each team to draw one piece of paper out of the box I’d prepared before the class. Each chit featured one of the following words: an ear bud, toilet paper, toothbrush, handkerchief (for the class with executives I used positions existing within their company instead).

Their first task was to work with their groups for 1 minute and find as many arguments as they could proving the life of the object they’d picked was great. That’s where the fun began: the first group was asked to say who they represented and gave the first argument that, in turn, had to be debunked by the other team, then defended by the first one, and so on.

You may set the time for each argument to be discussed but if you go for the funny objects, your students are going to run out of ideas quite quickly themselves. Decide on the winner basing on the strongest argumentation and let the second group present their object and their argument.

Remember to tell your students they can find The Wind and The Sun and other tales at BookBox’s YouTube page. Why not use it as a homework assignment?

See you soon and feel welcome to share your teaching experience!

P.S. Did you know the BookBox tales are available in more than 35 languages all on their YouTube channel?

Marta Styczen has turned her passion for languages and traveling into a daily routine as a is a foreign language teacher, educational content writer, translator, and backpacker. Her mission is to encourage people to enrich their lives through learning new languages and traveling, always inventing new techniques for faster learning and sharing them through her website www.5languageclub.com (still under construction),  www.veganbeautytravels.com and Facebook.

3 thoughts on “Classroom Debate – The Power of Witty Argumentation”

This blog is for BookBoxers made by BookBoxers. Our goal is to give you the best content and lesson plans around BookBox stories.